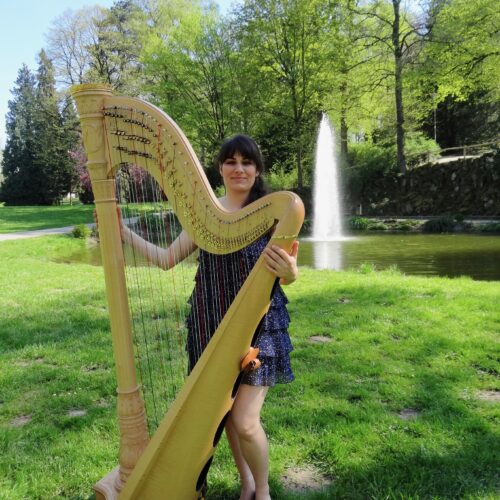 Elena Anger has started the harp at the age of 5 with Aude Wetterwald. She then studied at the Conservatory of Angers with Véronique Chenuet where she obtained the Diploma of Musical Studies (DEM) of harp and chamber music. In 2010, she won a first prize at the “Concours Français de la Harpe”.

Parallel to her musical studies, she graduated in 2011 with a degree in Modern Literature and Cinema from the Catholic University of the West. She has participated in various cultural projects such as the film festival “Premiers Plans” or played in a theatrical creation.

Elena then decided to pursue her musical studies and went to the Royal Conservatory of Brussels in the class of Annie Lavoisier where she obtained in 2014 a License degree of harp which led to further tuition under the care of Godelieve Schrama at the Hochschule für Musik in Detmold (North Rhine-Westphalia), where she graduated in 2017 with a Master degree of Soloist performance and Orchestra. She also perfected with Germaine Lorenzini for many years.

Elena performs in various chamber music ensembles (Astreos Duet Flute and Harp – Flute, Viola and Harp Trio – Duet Soprano and Harp) and orchestras which led to multiple travelling experiences. She has toured twice with the “Orchestre de la Francophonie” in Quebec and participated in the Rheingau Musik Festival and Young Euro Classic festivals with the Cuban-European Youth Academy. She regularly performs with the Detmolder Kammerorchester and has recently played with the Göttingen Symphony Orchestra or the Hagen Philharmonic Orchestra.

Elena has a long-standing interest in teaching and is currently studying instrumental pedagogy at the Detmold Hochschule für Musik and teaches at the Hamm Music School in North Rhine-Westphalia.

No concerts at the present time